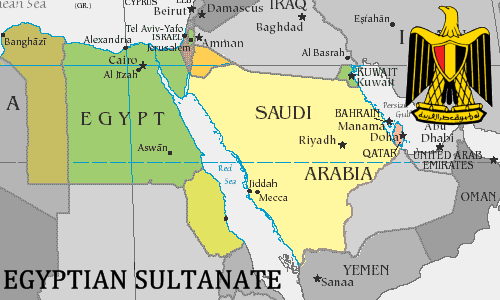 Abu Khalid Musa'ed Hashim al-Din bin Abdulmuin, Sultan of Egypt and Arabia, Sharif of Mecca and Medina, Hakim of Jerusalem, Sultan of sultans. The Sultan is the absolute ruler of his domains.

Council with executive and legislative authority acting for and on behalf of the Sultan, consisting of 64 members: 9 mujtahids (respected Islamic scholars, nominated by the Caliph of Cairo and appointed by the Sultan), 10 military officers (six field marshals for the six armies, the admiral of the sea of the sultan of Egypt, the sky marshal of the Air Corps, the general of the Red Knights and the commander of the Mukhabarat), the 12 emirs, 31 sheikhs (men and women whose input the Sultan values for one reason or another), the Grand Vizier who is president of the council and a representative of the Grand Master of Assassins, who is usually in absentia.

Cabinet of wazirs (viziers, ministers), executive body tasked with carrying out the day-to-day administration of the Sultanate, has no legislative initiative and acts always on behalf and with the implicit consent of the Greater Diwan. Members include, in no particular order:

The Sultanate has historically been exceedingly open to immigration from all nations, and unlike many other nation-states has never shied away from contracting foreigners to work for it. Large numbers of (frequently nationalized) foreign nationals hold important positions within the economic and political infrastructure of the Sultanate: for example its second-largest weapons manufacturer is a German expatriate; the Minister-Counsellor is a nationalized Frenchman; many of the government's bankers hail from Britain and the Yishuv and most of its warships are constructed with extensive aid of Byzantine, Cascadian and German engineers. Foreign nationals willing to settle in the territories of Egypt are only expected to pay the barest of lip-service to the idea that the Sultan is the ultimate master of his domains: there are no religious, economic or political requirements to immigration (although if one is a communist or Christian evangelical it does pay not to be too obnoxious about expressing one's views.)

The Hashshashin (from which the word assassin is thought to originate), is the Arabic name of the secretive society formed by the Nizari branch of Ismā'īlī Shia Muslims. The Hashshashin split from the Fatimid Isma'ili Empire following a dispute regarding the succession of their spiritual and political leader the Fatimid Caliph Ma'ad al-Mustansir Billah. The Hashshashin feuded openly with the Sultans in the early days of the Sultanate, before they were driven from their strongholds by the Mongol warlord Hulagu Khan in the 13th century. Sultan Qutuz allowed the sect to settle in remote areas of the Hejaz mountains.

Even though the theology of the Hashshashin is considered heterodox by Sunni Islam the sect was tolerated by subsequent Sultans in return for loyalty and certain favours, mostly to do with their status as legendary assassins and masters of asymmetrical warfare. Even today assassins of the Cult are commissioned to murder in name of the Sultan, quietly removing potential sources of unrest and instability within the Sultanate before they can become a problem. Fear of the assassins is one of the tools that allow the Sultan to control the scheming of his Court.

The Hashshashin also make up a number of Fida'iyun Brigades in the Sultanate Army. These brigades of volunteer fanatics exist outside the command structure of the Army and serve two purposes: in peacetime they keep Army officers from conspiring against the Sultan, and in wartime they act as saboteurs, commandos and assassins behind enemy lines.

Retrieved from "https://sdnworld.fandom.com/wiki/Sultanate_of_Egypt?oldid=7345"
Community content is available under CC-BY-SA unless otherwise noted.